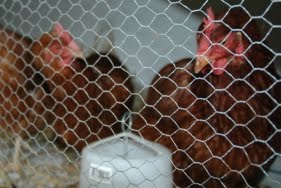 The chooks arrived in town on a little truck crammed with all the other chooks on the tenth of December. I think they were so glad to be away from the noise and clammer of the farm and all the other chickens that they settled into their new home readily and even began laying the following day.

I had set up the yard that so if I were a chook, I’d have liked it when I saw it too. A nice, safe little coop with high roosts. A straw-yard to dig around in with a huge pile of compost chock full of wriggly worms. Some pellets and wheat and some rainwater from the tank.

We average about two eggs a day between three chooks which is just enough to replenish what we use on a regular basis with a couple of days reserve in advance.

They have since made short work of the huge compost pile and after cleaning up a bit today in the straw-yard I was amazed to observe how dramatically they have changed their environment. Just about every green, leafy herb or plant has been . . . . decimated. They have legs on them like emus. After raking the ground over the only plants standing are the gum, the tamarillo ( the mighty, mighty tamarillo) and a clump of exuberant, fancy landscaping grass in a pot which is half dead and has probably been ear-marked as a possible future nest site.

The nasturtiums and the potato plants have vanished and the scraps from the kitchen and some from my brothers catering business get churned around and pecked at and made into compost quite easily and quickly.

There is one chook that gets out quite regularly despite our efforts to barricade the gate with pot plants. They are easy enough to catch though and have a peculiar habit of kind of hunkering down and flattening themselves against the ground while doing a little stomping dance. They do this and stay put and are easy enough to just pick up and pop back over the fence. There is very little running about involved – unlike the guinea pigs!

I am very happy with the way the chickens have been going and the fact that they are really quite quiet. Just a noisy episode now and then which I think is usually when a cat is in the yard and sets them off.

They are Isa Brown chooks which I settled upon for their quiet nature, egg laying regularity and compost producing ability. They are therefore a hybrid breed and perhaps one day when I have a larger space I will go in for having a more traditional breed of chook after researching several varieties.

Until then, they have really completed that final missing link in the garden that I have been planning for nearly a year.