It has been a busy couple of months. Mainly since November. For the most part of it the garden has had to make do with the watering it got and the feeble moments of attention administered to it between excursions to the shed and back.

Much of the time spent in the garden lately has either been to pile up mounds and mounds of grass clippings from the monstrous pile left at the side of the house from a lawn-mowing friend or picking the ever-ripening cherry tomatoes and cooking tomatoes. The g-pigs have had free reign since early Jan and the chickens much the same – free to come and go from their coop into the straw-yard without us opening and closing the door to the coop of an evening. This has worked well up until a few nights ago when it became apparent just on dark that two had got into the garden and one was missing. She was out scratching around the grass piles the next morning. 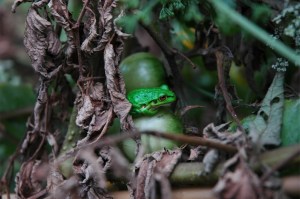 It was during the frequent visits to the tomato bushes that I realised that one of the little green frogs had really made one of the bushes home. Initially it was seen sitting on the spinach plant but as the weather got warmer and the spinach wilted it moved into the sturdier tomato plant above it. Then a few weeks later it had a friend.

There was the odd night that we heard calls but these didn’t last long and I’m not sure if it was this species of frog. Very, very happy to have them in the garden though.

The chooks are doing fine though we do have a clucky one that refuses to budge from her eggless nest. I will see to moving her to a smaller cage in the next few days. Otherwise the chooks are doing fine and with the addition of wheel barrow loads of grass clippings into the straw-yard the place is much nicer and there isn’t any of the chook smell that we were starting to get even after just a few weeks in the pen. The grass clippings make the place much neater and nicer and the tamarillo is no doubt very happy to have a good thick mulch under it.

So, after a suitable crop of tomatoes with the odd beetroot, zucchini, cucumbers and sunflowers popping up surprise harvests – I am now awaiting the tamarillo and pepino crops. We have just started to harvest the passionfruit that have been hanging on the vine patiently. Some are dropping off themselves now. The pepino is holding fruit well. After the hot weather of early January I ripped out the greywater set-up, dug up the garden placing two large basins either side of the tamarillo, lined them with newspaper and cardboard and filled the lot with grass clippings. I now just tip a bucket or two or water in that general area every few days with the idea that some water pools in the ditch and seeps out very slowly into the garden further down the slope. This appears to be working well with even zucchini and cucumber seedlings that were battling in the heat now flourishing. They have also had an added hand with the overcast weather we have had since late January due to the cyclone activity around the country. This has brought some light showers but largely overcast skies and more easterlies. The easterlies really knocked back the choko but the added light showers and reduced harsh sunlight have allowed it to come back with strong new growth that is now rapidly creeping its way around the decking. The top garden of tomatoes has been harvested and is now sitting awaiting a raised garden set-up.