It’s nine o’clock on a Saturday. Such a beautiful summers evening. A gentle breeze coming through the door. A dog barking in the distance. The smell of fading bbq’s and fragrant flowers in the air.
I have been reflecting on some of the hard work over the past twelve months that I have done in the garden. The aquaponics project was a huge project for me. The learning still continues. I am only now just being able to really leave it to its own devices without fear of grow beds getting too saturated – or not enough. I am still placing plants into the beds, more to keep the system happily filtering the water and nurturing the microbes that will be the hidden engine to the whole thing. Over the last few months there has been a change in the look and colour of the leaves of many of the plants and I put this down to the system finally coming into its anticipated state of play. Much greener and more vibrant looking.
On the couch my brand new little son is sleeping soundly. I have found it very rewarding to know that despite him being not quite two weeks of age, I have already been able to share the garden with him in many different ways. The playful, gentle sound of the water running into the pond. The broody cackle of the hens and the ‘chip, chips’ of the chicks. The heady perfume of fresh buddleia flowers. The cheeky calls of the Red-capped Parrots that come into the garden either early in the morning or late evening to feed on the sunflower heads. The clicking of the cicadas. A sound that will no doubt forever remind my son of the fact that his birthday is in summer. The overall feeling of just being in the garden at this time of the year. The energy is fantastic and there is always a surprise to be found.

For the large part however the garden has played itself out with the important task of feeding my wife nourishing, fresh foods. Granted, they were largely supplemental during her pregnancy, but I was justly proud when I looked at our summer meal tonight sitting on the plate before me and realized the only thing not from our garden was the little portion of meat. It’s been a huge journey for me setting the garden up. Finding out what is likely to work and what is best done away with. Even now I am planning the next stage of events for autumn given that now I think I have a good idea of what it is going to take to feed a growing family. The shifting yet again of the wine-barrel fruit trees. Planting the existing garden beds out with more bushes and herbs rather than salad plants – which I am having much better success with in containers. It will also make succession planting much easier and to judge quantities a bit better too. A spin-off of this container planting is that it keeps succulent, juicy plants out of the reach of the guinea pigs. Not that it has really ever bothered me (except when they were clear felling my second attempt to grow crimson flowered broad beans), but it will make things a little easier to manage with them. Particularly given we have another two guinea pigs soon to be added to the work force with potentially more – I suspect the two we picked up a few weeks ago are pregnant.
It is not quite mid-summer and there is still a tree full of figs, one of nectarines and the grapes are just starting to ripen on the vine. There is soon to be a real flush of tomatoes ripening, but we’ve been happy with the ‘one a day’ offering from one or two bushes which has been handy for salads and meals. Picked straight from the bush for our immediate use.
The pumpkin vines are working on filling out their fruit and still venturing forth to new areas of the garden and setting new fruit. I have quietly delighted in hunting down pumpkins and melons to keep a check on things after finding one pumpkin starting to swell out between the wood of the raised garden and the back fence. Another day or two and I would have had to cut it out to remove it!
I remember also seeing the first of the seasons ripe passion-fruit hiding high up near the shed roof. That will be something for tomorrows gathering. The raspberries are more or less done for now, though what I suspect to be a boysenberry may have some late fruit on it. Nevertheless, this years new growth of raspberry canes which I have been nurturing through the heat to allow them to establish, is promising to deliver a bountiful harvest next summer. 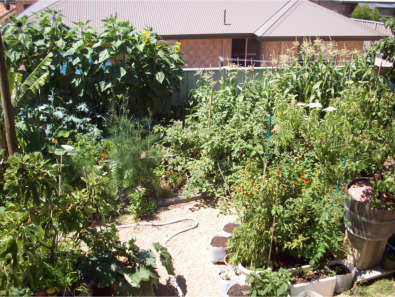 So, in setting out to see what it would take for the average person to set up a garden that would substantially supply the house-hold kitchen, I must mention two insights that I am left with in reflection over the last two years.
Insight one. The effort was tremendous. I realized very early on that the effort it took to do what I wanted to do and to have it achieve what I want it to achieve was far, far, far greater than your average suburban family is probably ever likely to willingly put in. This was a bit of a disappointment to me until I realized insight two.
Insight two. The effort is worth it – AND, the world is changing and people are now wanting to do this because financially it makes sense. Not just better for your nourishment, general well-being, relaxation, care of your immediate environment and the other living things in close proximity to you, your connection with nature which you are a part of whether you like it or not ….
Yes, financially, as cold as it is, it is opening peoples eyes to other ways and they are returning to the old way. Backyard edible gardens. A tomato in a pot, a few zucchini in a spare garden bed. A row of corn by the shed. Humble beginnings. But hand in hand with insight two and the utter disappointment I felt when I realized no one in their right mind would willingly duplicate my efforts to do the same for their family – the spin-off has been that my little petit paradis is also an inspiration to others. There is a kind of magic in that which you can’t put a price on.

So there you have it. A bit of a reflection on the two years so far spent here. I can honestly say that this next year will only be better. We have a burgeoning seed savers group that I am coordinating and meeting other keen gardeners has been a thrill to say the least. I have taken my observations of the garden through the past two years and the next challenge will be to get the back garden bed set-up for next summer. It has provided a pretty good crop of tomatoes, corn is still to come, sunflowers are HUGE, broccoli is coming along and there is a self-sown watermelon by the looks of it and some pumpkins that I am delighted with given that this was to be a year of melons. It still happened but in a completely different way. Once these plants are harvested then I will start work on building the soil up further and my ultimate aim is to have a soil that will stand up to and support plants in the heat of summer with the drying easterlies which we are encountering now and probably for the next month or so. I am also looking into setting up a garden infrastructure that will enable more vertical gardening in the coming years. At the same time I will be changing the plantings of the edge gardens that surround the house to more permanent plantings of berries, drought tolerant herbs and bushes, natives and fruit trees. 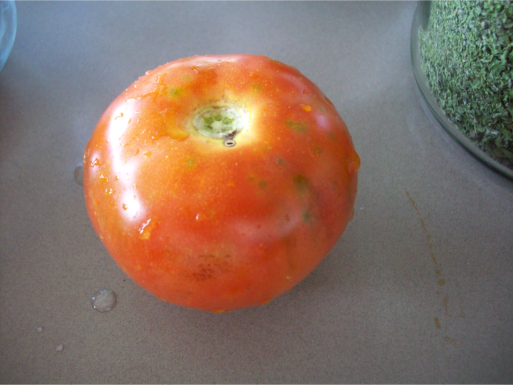 To be honest, it has been a real challenge at times and it’s only been in the last couple of weeks that I have stood back and looked at the garden (somewhat through my wife’s eyes) and said to myself “Yes, this is the garden that I am after. It is finally taking shape. I am happy with this – and I know it will only get better from hereon in.”
Sometimes, giving birth is like that I think. There are the pains and the sacrifices. The pushing of the boundaries – physically, mentally, spiritually. Yet despite the turmoil and the weariness, it all works out. I think about what my wife went through to bring out little son into the world and she still says “It was worth it.”