Just 8 months ago we moved home into a much smaller block with a predominantly native garden. A wide strip of grass and lots of natural, native sand. I’ve finally got around to getting some before and after photos uploaded. The photo below was taken on the 29th October 2010. I had to laugh! The water bowl in the top photo has been moved around numerous times throughout the garden. Look at where it turns up in the photo below – not far from where it started actually!

One of the main design changes has been moving the concrete edging further out to widen the plant garden and the replacing of the lawned area with limestone pebbles. This has actually kept a more moist and humid environment which gives earthworms greater access and movement than then lawn appeared to. In digging up the lawn it was incredible to see just how resilient it was. The sand held no water (this was during late summer early autumn) and was very dry to at least a foot and a half which is about where the roots of the grass stopped! 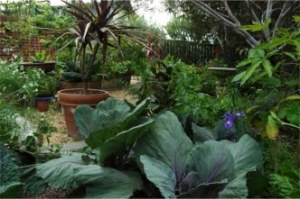 The photo above was taken in March 2010. Not long after the initial changes to the garden beds after a hand from my brother. The original reticulation piping was modified to follow the concrete edging but to date has never had to be used. As is evident in the photo below the garden has established well. There is a much larger tamarillo (now over 7 foot tall and ready to flower) at the edge of the shed. In the last few weeks the passionfruit has put on height and is sending out shoots to the side. Cabbages, beans, lettuce and nasturtium cover most of the ground with sweet potato beginning to leaf up again after runners were planted early winter. The leaves died down and it is looking at growing further with indications of several small tubers already forming in banks of soil and mulch.