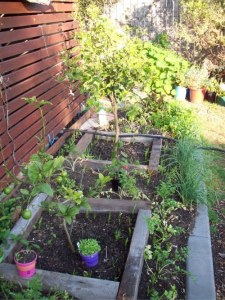 The lemon and the lime were talking to me. “Get us out of this pot!!”

I can understand why. They were almost pot-bound with the parsley plants growing alongside them. Long, long tap roots of parsley were cramping the pots. Two things to learn. Citrus don’t like being cramped in with other plants and if parsley has such a long, long tap root it is clearly pulling nutrients out of the soil and a decent depth and so should be IN THE SOIL!

So, not only did I take the plunge and plant the lemon & the lime into the garden bed, but I also made two nice little timber borders for them to keep them separated from the border plantings of …. parsley. Some of which I had pulled out of the aquaponics system because I figured that a plant with such a long tap root would be wasted in the confines of the grow beds, which are not quite 30 cms deep.

Its been just over a week since I planted the trees out and so far they are doing well and with the several days of consistent rain over the last weekend they appear to be holding onto the fruit that is forming. As is the apricot tree – which is very exciting!