Fashion – Your Future Depends on Wool!

Don’t mind the title, I’m not going to run the risk of transforming into a fashion blog.

But I thought we should post on some of the stuff we’ve been uncovering. We’ve been quite overwhelmed by the amount of it and to be honest it has it hasn’t been much fun. As in . . .

Now and then we get stopped and are forced, for a moment, to take a pause of appreciation for whatever item or object we’ve ‘discovered’. Here are a couple of those moments. This advert was probably from newsprint found inside a drawer. Though not quite ‘John Brown’, and a little tricky to get on despite my willowy figure, this vest pictured below – once on – fit just right. For all intents and purposes, from what we can ascertain, we assume the vest was made for Ernest Henry Absolon who was the first son of John Demansfield Absolon and Sarah Bowles Habgood. Ernest was born in what was then known as the Swan River Colony. He married later in life to Agnes Harper Watson in a double wedding on the eve of the new Commonwealth of Australia.

Agnes had a sister named Ruby who married her fiancée Austin Piesse in the same double wedding. The connection here is that Ruby and Austin built and owned the house Tillellan which we now call home.

The vest itself is nearly 118 years old, riddled with moth holes and smells like it’s been stored in the Arc of the Covenant for safe keeping. But how magnificently it was put together. It’s surprisingly heavy for its appearance and just lifts my work attire to a new level. 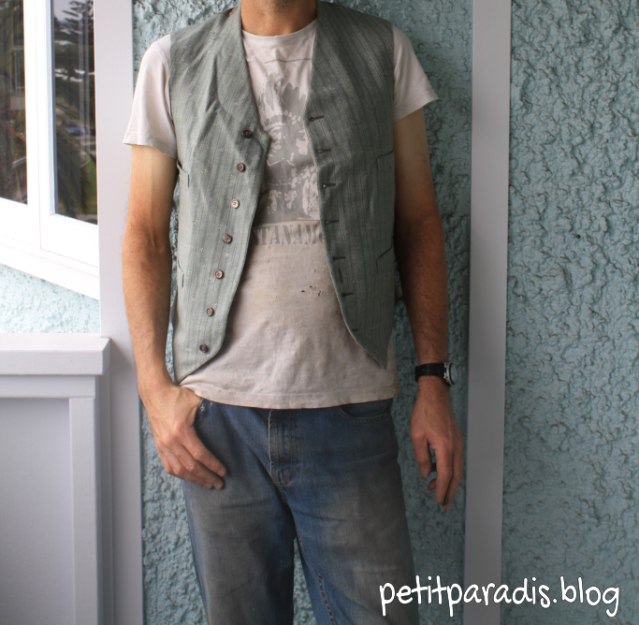 How to make work attire look a million bucks. Grunge look for the New Millenium gardener.

Not sure what the locals thought of the verandah fashion show . . .

This Magpie wasn’t sure what to make of the impromptu fashion display.

I am on a journey with my family to transition as closely as practicable to a state of self-reliance in suburbia. I practice permaculture principles in our house, garden and community. We are on the southern coast of Western Australia. To our north is the rest of the world. To the south, Antarctica.
View all posts by Petit Paradis →
This entry was posted in Observe & Interact, Use & Value Renewable Resources & Services and tagged australia, gardening, observations, permaculture, Petit Paradis, resources, stuff. Bookmark the permalink.

2 Responses to Fashion – Your Future Depends on Wool!