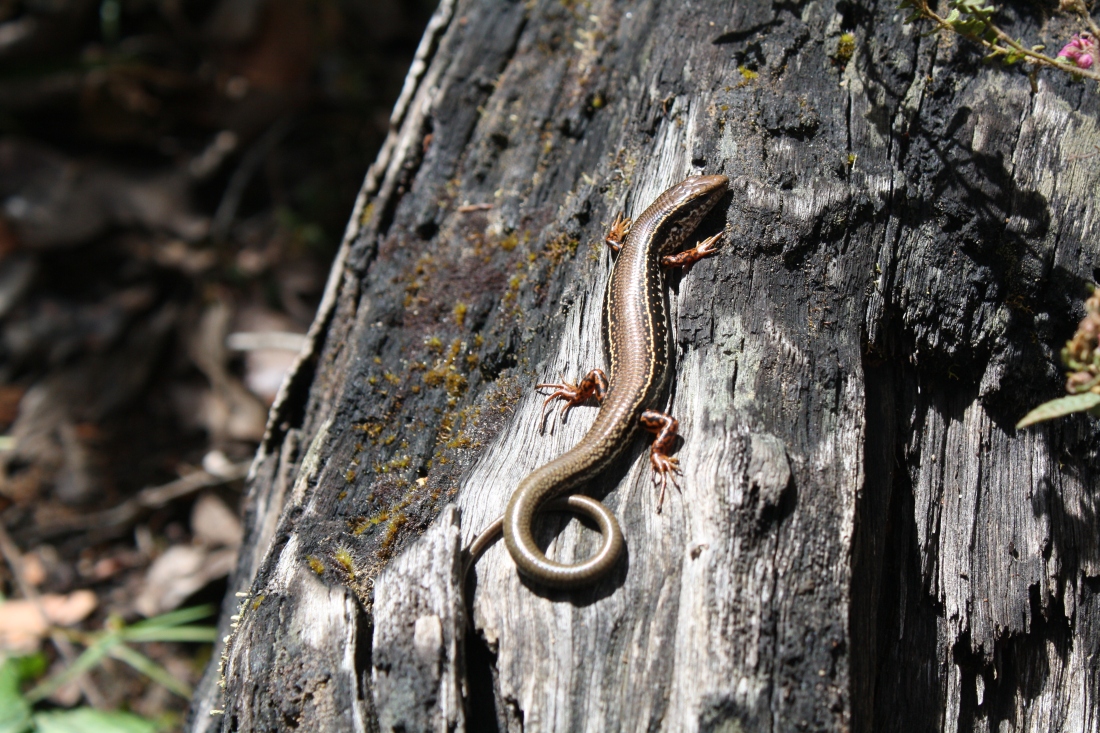 I have been progressively working on building up the garden. We have been here just over two years and the local wildlife have come to evolve with the changes in the garden. The King skinks are well fed and undisturbed by the neighbour who has ‘retired’ from trappin and relocating them. They are breeding and establishing themselves in the garden itself. I find their pokey entrance holes often.

The smaller skinks, the elegantly long  Menetia greyii or Common Dwarf Skink (above) are abundant. Which may be why the Kookaburras are paying more frequent visits than usual. When I am in the garden on a sunny afternoon I hear the rustle of skinks in the dry litter and see their sleek bodies racing through the garden. They are relatively small, but fast and wonderfully patterned. With piles of wood laying around ready for building, burying or burning (for barbeques and bio-char) it has created a fantastic habitat for them. Especially with the addition of grasses and mulches and rocks. As I work on the rock wall I have placed terracotta pipes into the wall. These pipes have hung around for a long time and I was going to place them into a gabion wall, but have decided not to do gabion walls in the garden. Instead, I have cemented the pipes into the wall in the hope that it will continue to create a home for skinks, or at least something.

One evening whilst I was watering the garden I heard a rustle in the pepino bush and looked up to see the quenda sniffing the evening air before slowly making its way along the garden ready for a feed. They have been digging up stale bread that Mrs PP bought home and which I enthusiastically buried in the garden and put in the worm farms. Despite having placed concrete slabs or limestone blocks over the filled in pits of bread, the quendas have picked up its scent and got digging. I sadly found the headless body of a quenda in the garden. So something is still visiting our garden that I am not keen on. The neighbours dog, which barks at most things, was never heard during the night, once again arousing my suspicions. So there is one less quenda, but given the frequency of visits and the tracks and diggings in the garden I think I can safely say that they have established themselves in our garden. Further adding to my determination to create, from the current state of deconstruction, a safe habitat for my quenda friends also.

Perhaps this is why, beneath the half rotted bits of timber that I am digging up from the garden after two years of being buried, I am finding large spaces or pockets. Perhaps they are tunnels from King skinks or quendas – or just spaces left from when the timber was buried by the digger in the first place. Regardless, I have been amazed at the amount of sand that has sunk into the crevices. I’ve even run water into the depressions and had it vanish and take plenty more sand with it. Maybe some of the timber has been broken down by creatures in the sand, laying rotted and allowing air into the subterranean playground.

Now I am taking things to a new level. Preparing the ground for structures, more retaining walls. Digging up the earth. Disturbing things. Yet the visiting birds are frequent and friendly. Swooping in past me, within inches of my face. Moving about in the dirt a few feet away whilst I dig or move sand. A pair of Laughing Turtle Doves have started to frequent the backyard. As I was watering the raised garden bed one afternoon I looked up to see them only feet away, happily searching through the disturbed sand for seeds. Despite my movements, though slow and steady, they simply walked away from me as I made my way up the slope of the garden. Sunbathed a little, perched on the trellis. Seemingly content and happy.

The young, potted trees are growing. Given I am home at the moment and they are getting a good, regular watering – they are thriving and I keep looking at them and seeing them planted up the back, strong and mature and creating a forest on a hillside. I yearn for the day that I can actually start planting them out. Hopefully only weeks to a few months away. They have fresh new leaf growth. They know the time is nearing.

The odd piece of coffee rock that I add to the rock wall I am building starts crawling with ants, yet another disturbance in the garden. A dwarf skink rests in the shade under my legs as I rest also. Then it darts off, so quickly the only reason I am able to keep my eyes on it, is because it stumbles near the timber sleeper at the side of the bed before practically leaping over it and scooting into the wormwood hedge.

It is amazing how much rock it takes to make a rock wall. Hard work. Really hard work. Yet I am determined to use the resources that I have where possible and by relocating the coffee rock from the berm made for the rainwater tanks, I am freeing up that space for another project. Bit by bit, the mayhem and chaos that has been our garden is starting to convert to a more orderly,  practical garden.

3 thoughts on “The Destruction of Home Making”