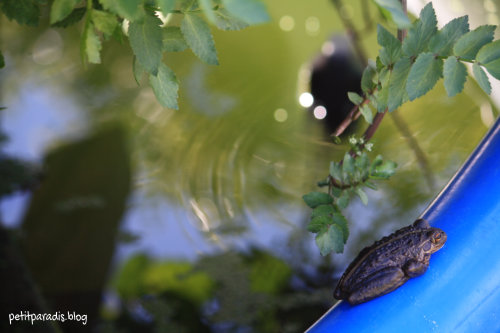 The early morning is when the garden is at it’s most alive.

Bullfrog is calling of course. Especially if there is a light rain shower in the  hours before sunrise.

There are golden bees, floured with bright golden pollen, crawling through the brilliant yellow pumpkin flowers. The chilacayote vine is rambling all over the place and I stop frequently to direct its searching tendrils away from paths and other plants.

Now and then there is a rustling of leaves as a King Skink shifts quickly along the ground that is resembling more and more a forest floor, dressed with leaf litter and wood chips and embellished  with the wilting, royal blue flowers of borage or the deep burgundy of the dahlias.

This morning I shifted the guinea pigs hutches. Otter and Sunflower were put to work at the top of the hill to reduce the kikuyu grass. Nibbles and her three new offspring were put into a smaller hutch closer to the house to ensure, hopefully, less interference from the neighbours curious boys, and regular, supervised handling by the family so that they become accustomed to us more so than their parents, which we received ‘second hand’.

Our male guinea pig, Robert the Pig is back in his own hutch for a while and will also be put to a more direct line of work in the same fashion as Otter & Sunflower, keeping the vegetable matter under control and converting our delicious tidbits from the kitchen into manure for the garden beds. 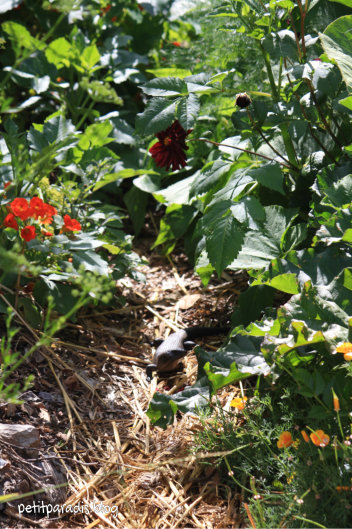 In the evenings there are random visits from Splendid Fairy Wrens and the highly secretive Red-eared Firetail Finches. The finches are rarely seen, but their very unique call, sounding like a very gentle, single whistle, is unmistakeable.

The pumpkin vines have grown another couple of inches by the end of the day and need a little redirection back into the garden beds. The tomato bush, with its burgeoning branches, gets threaded back through the trellis to support itself. It’s had green fruit on it for weeks. Hopefully we get a bit of a blush before Christmas.

Recently we’ve had sightings of rats running along a fence and into the neighbours ivy. Not a good sign. Especially with beans, tomatoes, cape gooseberries and peas coming on in the garden. We’ve also sighted a Bandicoot or two. Quite likely to be living in the pile of tree clippings and drying grass up near the water tanks. We have seen signs of them digging in the garden for some time now. Usually to uproot some grass roots or the odd insect. I found some potatoes uprooted, but they were undamaged and could have also been the neighbours curious dog.

The garden is changing quickly. I’ve re-potted more tagasaste and acacia to have them ready for an autumn planting.