Our rabbit breeding ventures are under way with Luna, our grey Flemish Giant giving birth to seven kits around the 1st of May. This is the first time we have bred rabbits and we have really only started it at our current property so that we can get a handle on it before we move to the new property and larger garden area.

Given the adeptness of rabbits at multiplying it has triggered some careful population planning on my behalf in an effort to manage their eventual accommodation needs and our ability to provide these needs with limited time.

In between daily life I formulated a design in my mind for tackling this challenge and with the resources at hand managed to come up with this.

This design is more than rabbit accommodation. It takes into account that we had a mattress support that was going to get thrown out and instead of it winding up in the skip bin at the building site or on the verge for collection, I brought it home to strip it down for using as the base of my design. Wire was salvaged from my in-laws place when we did a clear-up, as was the reticulation pipe and the wire used to bind it all together.

We are currently breeding Flemish Giants as our rabbit breed. They are a large rabbit which requires human interaction in order to keep them docile and tame. You want them docile and tame because they are a fair size and having one behave otherwise is like the containment attempts of security guards on teenage girls at a Justin Beiber concert. A whole heap of wriggling and scratching that just isn’t fun, and with small kids can be quite dangerous. Just today I acquired some small tears in my t-shirt after an attempt to pick up Blackberry to see if she is pregnant. She is. And she is strong too!

We received our first two does ( Luna & Blackberry ) in January 2016 and our first buck just over a year later. The idea behind the rabbits is quite honestly as an extra food source as we began to see the rising food costs from having Gran living with us, but also the eventual increase in food consumption with our two growing boys.

Our thinking in this regard is to keep our original does as our pets ( hence the boys got naming rights ) and to breed out from these. So far we have bred Luna and have seven kits which are due to be dispersed shortly. Some of these we will probably sell to recoup some costs. Blackberry is carrying young and is expected to give birth within the next week or so.

To date the major expense has been the initial cost of the rabbits themselves ($30-$35 each) and the feed we buy in from a local stock feed store. Unfortunately the rabbits do not eat all of the feed we give them so we are looking at eventually making our own mix up. In the meantime this spoilt feed usually gets cleaned up by our treat-seeking free-range guinea pigs or the chickens when they are released from their yard to embark on a clean-up mission.

We have eaten rabbit before, though this will be the first time that we have grown our own and the thinking was to get used to dealing with rabbits before we make the move to the larger garden. If it all goes to plan then we will look at keeping a steady population that is turning over regularly and have access to the feed grass that the larger gardenwill offer. 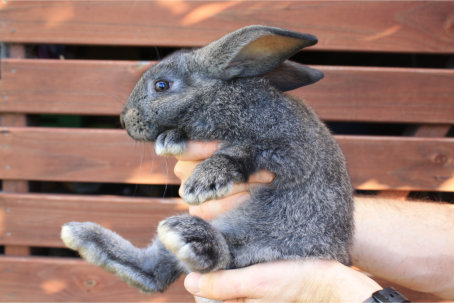 One thought on “The Rabbits of Petit Paradis”