Today I began the task of sorting through the stored wood from the renovation. I had kind of started some weeks back, putting aside certain lengths of structural timber of certain dimensions for the trellis along the retaining wall.

The Little Fellas have since hit upon the idea of a cubby house out in the courtyard and though I had plans of a “One Day” cubby house in amongst the garden, I had to agree that a little dwelling near the back door could work sooner than later. Also, there is probably well and truly enough timber if I took the time to carefully sort pieces and put them aside.

Thankfully, this also meant that I was making room in the process of sorting, for the impending hot house and chook pen to be constructed. AND, it also means that I can practice my wood working skills on a cubby house before the somewhat more challenging task of the combined hot house and chicken house. It also means the Little Fellas get to have a cubby house earlier in the school holiday break, rather than when they return back to school.

Now I also took the opportunity to set out the garden beds for the banana gardens also. These are two large containers that I was going to use for aquaponics but have since decided to utilise to grow bananas in our zone 1 area. Because that’s what it’s all about isn’t it? Growing bananas at your back door, rather than right up the back!!! 🙂 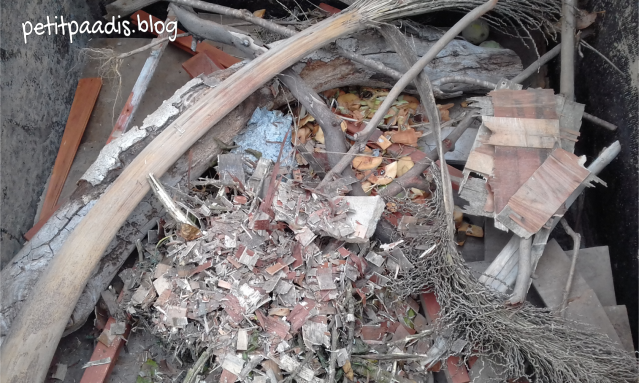 Actually, I like the thought of having something benefiting from the heat trap that the retaining wall creates and being able to look out to a bit of a jungle. I can then utilise the garden beds to grow vegetables and move any extra pups that the banana yields to space further up the slope. So the containers got filled with sticks and off cuts of wood. Mulched branches, paper, cardboard, food scraps, a bit of sand. Dried sunflower stems and corn stalks. Old rags and fabric.

One of the containers actually got quite a bit of old timber with nails and quite a bit of cardboard and old fabric. It will be interesting to see how this goes over an extended period of time.

Topped with sand from the top of the wall which was easy to drop down into the container. Then I wet it down with greywater. I will add more material as time goes by and the levels drop. Then plant out with the young banana plants that I already have, and perhaps some arrowroot or canna lilies.

I am on a journey with my family to transition as closely as practicable to a state of self-reliance in suburbia. I practice permaculture principles in our house, garden and community. We are on the southern coast of Western Australia. To our north is the rest of the world. To the south, Antarctica.
View all posts by Petit Paradis →
This entry was posted in Catch & Store Energy, Creatively Use & Respond to Change, Design from Patterns to Details, Plants, Produce No Waste and tagged Albany WA 6330, bananas, environment, food, kids, nature, permaculture, permaculture zones, Petit Paradis, resources, Tillellan, waste reduction. Bookmark the permalink.