I’ve observed before in the garden how Autumn conditions have an effect on certain aspects of the garden like Spring. Plants put on a burst of extra growth, the activity in the soil picks up after the heat of summer. 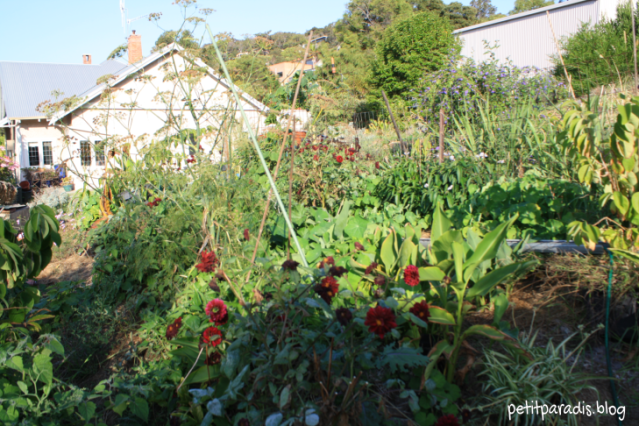 The days can still be reasonably warm. The sun still intense. Yet the addition of short bursts of rainfall and a cooler night time temperature seems to give the overall effect of extra fertility and aliveness. The dahlias, cosmos and Californian poppies are going strong, though the dahlias have some mildew on their leaves. The fruit trees are looking healthy in whatever way they present themselves at this time of the year. Some are budding, some are losing leaves, others getting ready to fruit. 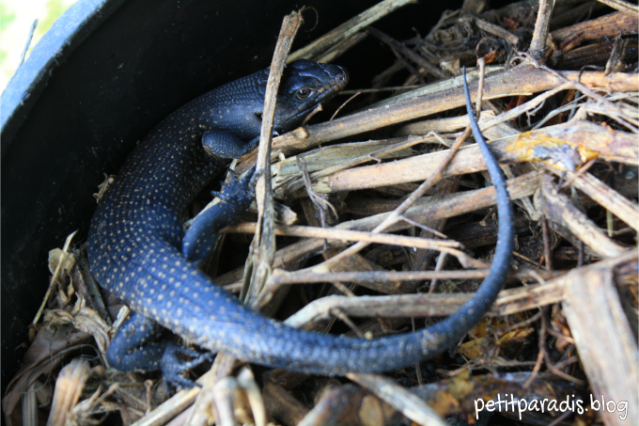 The younger skinks are moving about the garden. The one above has taken up permanent residence it appears in one of the compost bins. It is really warm and abundant in insect life. I’ve watched others sunning on the rocks and concrete outside the bathroom window. The Little Fellas have recovered another, sitting on a rock in the middle of the tadpole pond. The tadpoles are also doing well. Though some started emerging as frogs some months ago now, others are still happy to swim about, though they appear to be emerging more rapidly and I’m happy that they are adding to the growing numbers in our garden. I have noted that the Western Banjo Frog has ceased its calling in the last couple of days. As though it’s allocated calling time was up and it just stopped. 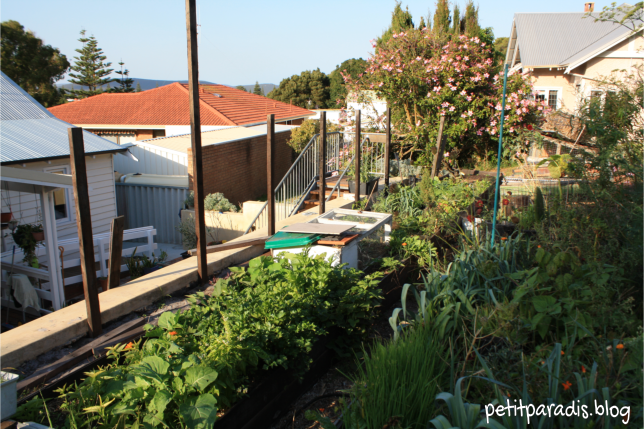 The salad garden is starting to pick up, though it needs a bit of work, but it looks abundant enough in this photograph. The timber poles are the trellis that is still in progress. This was the way of things yesterday, despite the conditions of today in the previous post.

I am on a journey with my family to transition as closely as practicable to a state of self-reliance in suburbia. I practice permaculture principles in our house, garden and community. We are on the southern coast of Western Australia. To our north is the rest of the world. To the south, Antarctica.
View all posts by Petit Paradis →
This entry was posted in Catch & Store Energy, Design from Patterns to Details, Observe & Interact, Obtain a Yield, Produce No Waste, Use & Value Diversity and tagged Albany WA 6330, animals, australia, environment, food, frogs, gardening, nature, observations, permaculture, Petit Paradis, resources, Tillellan. Bookmark the permalink.